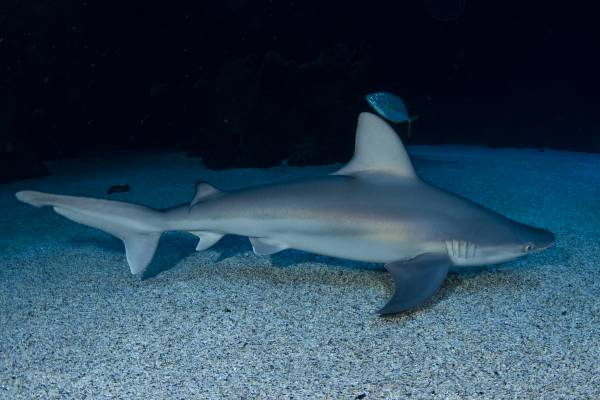 Poema del Mar from yesterday, Wednesday October 16, is now exhibiting three Sandbar Sharks (Carcharhinus plumbeus) to its visitors. Irma, Andrea and Samil, as the sharks are called, arrived at the aquarium last May from Loro Parque and, after a period of quarantine, have been moved to their new home in Deep Sea, the largest curved display window installation in the world. All three belong to the second generation of this species born in the portuense zoo, thanks to the meticulous work of reproduction and breeding by the aquarium staff.

After this phase of adaptation and acclimatization, and after proving that they continued to respond perfectly to the training to which they had been accustomed from a very early age in Loro Parque, these three specimens are already now sharing the space with five other species of sharks that inhabit the waters of the ‘deepest ocean’ in Poema del Mar: four Sand Tiger Sharks, four Nurse Sharks, three School Sharks, two Oceanic White-Tip Sharks and a Bull Shark.

More additions to the aquarium are expected soon for this species, which can live up to 45 years and reproduces only once every two years. They are viviparous animals, so the young are born fully developed and each female can give birth to between seven and ten specimens.

Irma, Andrea and Samil, like the other Sandbar Sharks that inhabit Loro Parque, act as perfect ambassadors for their fellow beings in the wild and help draw attention to the protection problems facing marine species. The International Union for Conservation of Nature's Red List of Threatened Species includes 11 species of sharks, and it’s estimated that 100 million sharks die each year as a result of human consumption.