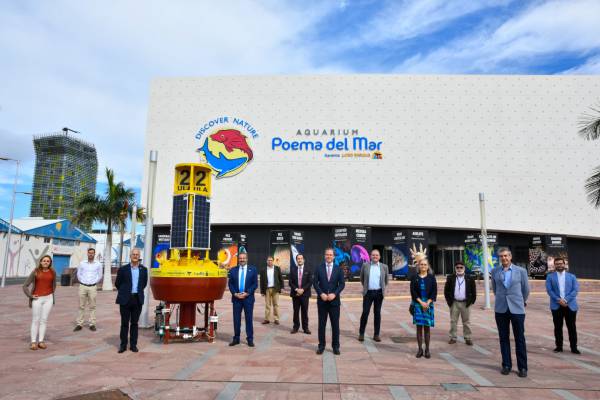 The Poema del Mar Aquarium was the venue chosen today for the presentation of the first CanBio results, a pioneering public-private research initiative financed with 2 million euros by Loro Parque and the Canary Islands Government and developed by research teams from the University of La Laguna and the University of Las Palmas de Gran Canaria. The aim of this network is to establish a data and monitoring network for parameters linked to climate change, ocean acidification, underwater noise pollution and the impact of all these on marine biodiversity in the Canary Islands.

Among the first results that cover the study of common environmental problems in the Macaronesia, the coordinator of CanBio and director of the Loro Parque Fundación, Javier Almunia, explained that they include the increase in temperature recorded on the coasts of Tenerife and the consequent transformation of the coastal habitat with the proliferation of tropical species that invade the depths. He added that "changes in the underwater acoustic environment are being studied, with the recent installation of a buoy in Gando and another soon to be installed in El Hierro, which measure noise in the sea and allow its effects on fauna to be studied, as well as the loss of marine biodiversity, the alteration of ecosystems and the disappearance of species". CanBio Canarias has become the only Spanish marine observatory to be integrated into the European network for monitoring ocean acidification.

At the press conference, the Councillor for Ecological Transition, the Fight against Climate Change and Territorial Planning, José Antonio Valbuena Alonso, highlighted the importance of public-private collaboration and stressed that "the core where decisions are made are the two Canarian universities of excellence that we have" and the research of this type carried out by the ULL and the ULPGC "provides more and more information, not only to combat the consequences and effects of climate change in the Canary Islands, but also in the global context", he said.

The research approaches that have been taken so far in these areas, according to the Rector of the University of Las Palmas de Gran Canaria, Rafael Robaina, "did not address the problem in a multidimensional way" and CanBio proposes "research in an interdisciplinary and transdisciplinary way that will allow us to obtain more information to increase our knowledge about the oceans". He also stressed that although "we have a poor rate of investment in science in Spain in general, and in the Canary Islands in particular", thanks to the collaboration and support of the private sector in projects such as this, which "is an example of transdisciplinary science and public-private science, this is what we need for the future that lies ahead", he said.

For his part, the Vice-Rector for Research at the University of La Laguna, Ernesto Pereda, positively valued the fact that "despite the complicated situation that we are experiencing, Loro Parque Fundación is maintaining its support for R&D projects and getting involved in science, which allows this type of project to be carried out", as well as others that are being developed with the University of La Laguna. In this respect, the Vice-President of Loro Parque, Christoph Kiessling, thanked the Canarian universities for their commitment and support in this initiative, and valued its results as "very important for the conservation of biodiversity, which is also our main objective".

More in this category: « The aquarium in Gran Canaria, Poema del Mar, is a centre of scientific interest because of the 24 sea dragons born in its installations Interview with Patricia Campos, Technical Director and Curator of the Poema del Mar Aquarium »
back to top